The Head as a Conductor

Having spent six years at Wells Cathedral School (one of the five UK Specialist Music Schools), the last two as Head of the Senior School, I’ve learned a lot about music and even more about leadership.

Having watched easily 200+ concerts in the last few years I’ve come to understand the importance of the role of the conductor. I’ll be honest, at the start I couldn’t really see what the point of the conductor was – surely the musicians knew what they were doing; they’d practiced, they had their music to follow… what more could they need? But having seen the difference a great conductor makes, I’ve come to see there’s something to that seemingly random hand waving, and that it might be a useful metaphor for describing the role of headship.

Wikipedia say this about the role of a conductor:

The primary duties of the conductor are to interpret the score created by a composer in a manner which is reflective of the specific indications within that score, set the tempo, ensure correct entries by various members of the ensemble, and to “shape” the phrasing where appropriate. To convey their ideas and interpretation, conductors communicate with their musicians primarily through hand gestures, typically though not invariably with the aid of a baton, and may use other gestures or signals, such as eye contact with relevant performers. A conductor’s directions will almost invariably be supplemented or reinforced by verbal instructions or suggestions to their musicians in rehearsal prior to a performance.

So why do I think this is related to headship? Let’s pick it apart bit by bit…

One of the primary roles of the Head is to interpret the ‘score’, whether that’s national requirements or guidance on education, curriculum designs, the views of the Governors, the school’s vision and ethos, etc. The Head’s role is to interpret these within their own context, for their own schools in the same way as the conductor must for their orchestra… The conductor doesn’t write the music, they work with the music they are given, in the same way the Head has to work within the constraints of educational systems – although as with music there’s scope for a fresh arrangement!

Another key role of the Head is to set the pace of school life. To understand the times when the community needs to slow down and really focus on a single idea, and those times when the school should be full of life and energy and running at 100mph. Managing this, and taking the community with you, is an important aspect of Headship as much as it is for conductors – without the variation in tempo, the music, as well as school life, would be very dull!

ensure correct entries by various members of the ensemble

An orchestra is made up of different sections, which make different sounds, working together. An orchestra of sixty plus instruments creates a sound unlike anything else. Schools are much the same, made up of very different people with differing strengths, interests – and that’s just the staff! Co-ordinating all the different parts, bringing them in and out to create flow and narrative is an essential part of of headship. Without this co-ordination everyone just plays their bit whenever they feel like it and all we end up with is a messy cacophony! Ensuring we are all working together and co-ordinating our efforts enables us to produce amazing music together.

to “shape” the phrasing where appropriate

Bringing the best out of the music, and working each phrase to highlight the important parts, is the sign of an excellent conductor. It is the same with headship; the ability to provide focus, to shape the narrative, to provide those little tweaks on the tiller which bring the best out of school life.

How the Conductor guides the Orchestra?

To convey their ideas and interpretation, conductors communicate with their musicians primarily through hand gestures, typically though not invariably with the aid of a baton, and may use other gestures or signals, such as eye contact with relevant performers.

The leadership of the conductor during a performance is done through lots of subtle and not-so-subtle cues. As times goes on in a performance the conductor increasingly disappears into the background as you become lost in the wonder of the music and the individual performances. The same is true of headship; leadership is achieved often through the use of a question, a prompt, or a look which reminds them of something and pulls them back into the group or prepares them for something coming soon. Much of school life is in performance mode – lessons, clubs, activities, concerts, drama, sport etc – as these things are happening there isn’t time to make significant changes (these must be done in rehearsal – more on this in a minute!), but there is time to remind people of agreed culture, key priorities, etc. The performance is exciting and scary both in schools and in music – but just like with the orchestra the real work is done in the lead up to the performance. 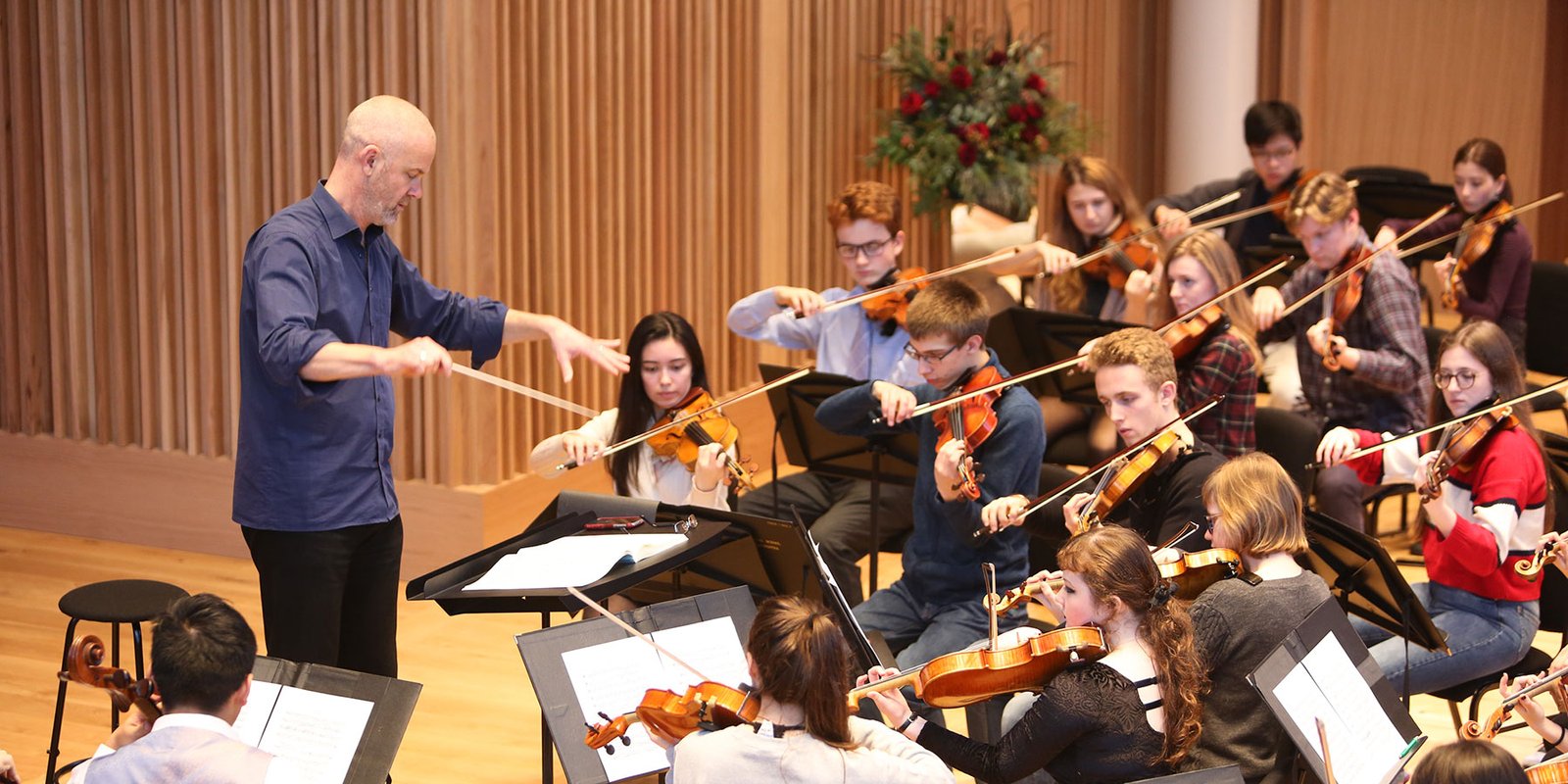 A conductor’s directions will almost invariably be supplemented or reinforced by verbal instructions or suggestions to their musicians in rehearsal prior to a performance.

This is where the real work of headship goes on, in the background, before the event. The conductors real influence on a piece of music doesn’t happen on the night of the performance, it happens in the hours of rehearsal that lead up to it. It’s at this stage that the conductor can experiment and ask the orchestra to try different things and discuss ideas with them. It’s at this stage that the conductor can share their vision and passion for the piece, providing context which helps to bring the music to life. In many ways the musicians would probably be fine without the conductor for much of the performance, if the conductor has done their job well enough in rehearsals… and it’s the same with headship. If the Head has established the purpose and the culture well enough in rehearsals, then whether they are present in every daily act of school life isn’t really important because their impact ripples out through the performance itself. That’s not to say they don’t have an important role to play on a day-to-day basis – they are still needed to help co-ordinate the team and shape the message, but for short periods the school/orchestra are able to manage perfectly fine on their own!

In fact much of the work of the conductor doesn’t even involve the orchestra, it happens as the conductor spends time thinking about and reflecting on the music they want to make. Headship is the same; it’s too easy for us all to get bogged down in the important and practical aspects of the performance – but our real work happens behind the scenes as we spend time understanding and interpreting the score so we can share it with our communities.

Whilst it’s not a perfect metaphor for headship I hope that this article gives you some insight into my thoughts both on classical music and into leadership and headship. I believe the conductor is an excellent role model for all of us in headship, which can help us understand what the most important parts of the role are – and maybe help us to better focus our time on the things that really matter.

I’d like to take a moment to thank the many musical colleagues I have the privilege of working with at Wells Cathedral School who have taught me so much about music, and much more…

…and just for a treat, below is the Wells Cathedral School Symphony Orchestra performing “The Carousel Waltz” from the musical Carousel from October 2017.